Ok, as we all know Step Three says: ‘Made a decision to turn our will and our lives over to the care of God as we understood Him.” And all of us who have been around a bit know that even though this says “made a decision” it really is a process of many decisions made over a period of time. 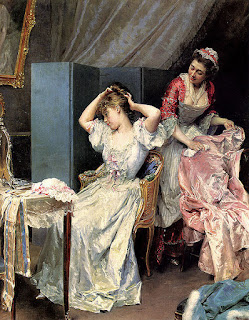 In early recovery we may have a ceremony or make a formal ritual and we “take” Step Three with our sponsor. That is a brave act of considerable intimacy. Later, often when life is hard, we take it again. Spiritual maturity teaches us that sooner or later we’re gonna turn it over so why not sooner rather than later. I like to say that instead of waiting to hit the wall I like to take Step Three when I see the wall coming.

So it’s a process and our spiritual growth deepens with each layer—each area of our lives that we eventually surrender. I have taken a Third Step on relationships, money, work, jobs and even cars. I learned this great phrase form a spiritual teacher: “Give yourself to God. Surrender your whole being to be used for His righteous purposes.”

Note: It says your whole being.

This year I had a revelation about a new layer of surrender in front of me: What I look like.

I have always cared about my appearance. Clothes, face and hair. Superficial? Not very spiritual? Maybe, but in early recovery  when I was getting very very spiritual and perfect, and when I had taken that first ceremonial Third Step, I decided that I was too spiritual for hair color, make up and such, yes superficial things.

Luckily I had a sponsor who was tall and blonde and stylish –and very sober--and she said, “God does not want you to wear sackcloth and ashes, God loves you, now go get some highlights back in your hair.” Turns out I was just using the “I’m too spiritual for makeup” as another way to impress and people please and try to convince God to like me.

My sponsor said, “Cut that out, this is about attraction rather than promotion. Do you want new women to think they have to look awful?”

But flash forward 25 years and I am daily surrendering work and my artwork and my marriage and money and most aspects of my life. But also on most days I am agonizing over my hair. I still can’t find that gamine cut that leave me looking pretty and smart all at the same time, kind of like Susan Sontag in a bikini.


So it hit me: I have turned over everything else so why not how I look? Does that seem weird? I thought so too. But it was just a wild enough idea and worth a try. So I’m doing it. Like most other surrenders there are two parts: God’s and mine. Like getting a new job I have to ask for God’s will but then I still have to go and rewrite my resume. In this case I have to do a modest amount of self-care and then let go of the rest.
Posted by Diane at 7:46 PM

Diane, I love this idea! I will try too...and I suspect will help when my anxiety kicks up about aging :)