Getting Your Emotions Ready for Thanksgiving

Even though it’s been years since I had Thanksgiving with my own family I still get nervous as this holiday approaches. When I was growing up November always brought a wave of panic. My mother wanted the house to be nicer than it was, so each year we were subjected to a frenzy of last-minute decorating on a shoestring.

One year she bought cases of caulking compound to remedy the drafty chill. We had that caulking goop for years and in the summer, we used the guns to play Combat. Another year she decided to make over the master bedroom. Her plan was to “tent” the bed in yards of gauzy fabric.

But my mother didn’t know how to sew; she could picture the end result but not how to get there. We had that fabric for years. I made togas for Latin class, we wrapped gifts in it, and ten years later, when my niece got married, we made shower decorations with the last of those pastel yard goods. 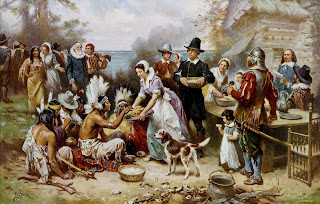 While my mother was decorating, my father cooked. He would stay up all night tending the bird.

On Thanksgiving morning, the the scent of baking pies was added to the aroma of roasting turkey, and that would combine with the odors of Spic & Span and dusting spray, as my mother furiously cleaned.

Tension ran high. We were shouted into baths and clean clothes. When the doorbell rang at noon, we smelled, and looked good.

Aunt Junie always arrived first and brought her own pies. Yes, she knew my father was
making the dessert--he did every year--but every year she brought her own pies and acted surprised. What can I say? She was his older sister. Sibling stuff doesn’t age out, it just gets played out in new ways.

Next was Aunt Martha, who pinched us –hard –on the cheek. We’d whine to our mother, and she would say, “Be nice to her, she doesn’t have any children”, as if that explained why she wanted to torture someone else’s.

Soon the house would be filled with people. The cousins went straight to chasing and teasing each other. We saw then, but only knew later, the significance of each cousin’s ways: The one who always stood back to watch is now the writer; the cousin who schmoozed with the adults became a politician, and the one who happily ran to get refills for the grown-ups--finishing off their drinks enroute—is now a popular speaker on the recovery circuit.

Of course, we didn’t see the adult side of things. I didn’t know about the barbs my mother got about our old house from the Aunt who “married better”. I didn’t know that this pain was the fuel for my mother’s decorating frenzy. I also didn’t know until later that the men sitting around the kitchen table were zinging their darts at my Dad. He was the only one who had finished school and moved “upstairs” in the plant. Now I see why he had to excuse himself so often to “check on the turkey”.

Most of our families have a version of these scenes. On Thanksgiving we’ll be humming, “We gather together….”, but mothers will sigh over daughter’s hair, the childless will offer parenting advice, and the uncle who has plenty will tell those who have none how they should invest their money. Old wounds will be given a good jab intentionally or not.

We come to this meal each year hoping for the holiday we remember from childhood. So, if the tension rises in your dining room on Thursday just consider it a warm up for the December holidays to come, and like a warning shot fired over our feelings, let’s be gentle with the people we sit down with today.
Posted by Diane at 8:33 PM 6 comments:

A Guest Post-John Kahal--How to Start Your Day

The 10 Healthiest Ways to Start Off Your Day

By John Kahal, Founder and CEO of Solutions 4 Recovery 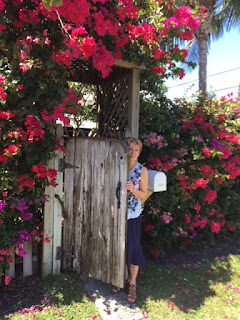 At the outset of the recovery journey, feelings of joy and happiness do not come easily. Those emotions were hijacked as a result of a drug or alcohol addiction, and may take a little while to reappear in the daily spectrum of emotions.

Living each day, or hour, without the crutch once depended on to dull emotional pain means opening oneself up to raw, unanesthetized feelings. Early recovery is often marked by a sense of anxiety, trepidation, loss, and uncertainty.

Knowing that this difficult stage will pass is critical to moving through it successfully. In time, brain chemistry will normalize, allowing for a renewal of spirit to replace those initial feelings of uncertainty. As each day passes, sobriety is reinforced and daily life becomes increasingly populated with positivity.

Each small accomplishment builds on the last one, until, over time, a renewed sense of self-worth is established. A positive sense of self-worth leads to increased confidence. Like a snowball gathering momentum and girth, these small victories can grow into authentic happiness.

One of the best strategies for jump-starting this process of renewing the spirit is to create a daily routine that starts off with healthy actions that lead to feelings of accomplishment, gratitude, and self-love. Starting your day doing things to benefit your health and wellbeing will set a positive tone that will resonate throughout the day.

New habits take practice, usually a minimum of 21 consecutive days in a row before they become second nature. But sticking with them will reap amazing rewards across all aspects of one’s life, with improved mood, a more positive outlook, sense of accomplishment, growing confidence, and a healthier body only enhancing your new life in recovery.

10 Healthy Starts to Your Days

About the Author--Many thanks to John Kahal, founder of Solutions 4 Recovery, and a regular reader of Out of the Woods:

John T. Kahal is the founder and C.E.O. of Solutions 4 Recovery, a comprehensive addiction and dual diagnosis treatment program located in South Orange County, California.  After his own successful experience with the recovery process and journey, Kahal decided to create a unique program that was individualized for each client’s specific needs.  Kahal’s passion to share his own positive experience with others, while being a living example of the freedom found in recovery, is what motivates him to guide clients toward their own stable, long-term recovery.
Posted by Diane at 7:11 PM 8 comments: