A Glass of Water is Enough

I was listening to a man read his listener essay on my local public radio station and a man was describing his experience of meeting the children’s television celebrity, Mr. Rogers.

The man was telling what it was like to be in Fred Rogers presence. He talked about how straightforward Rogers was and how very present and centered. He described the impact of that brief meeting.

The man described how, after Mr. Rogers died, he began to notice that when he was with his own kids he was always trying to be such an entertaining dad. It then occurred to him that Mr. Rogers wasn’t necessarily entertaining, rather he was simply himself. Mr. Rogers just was-- and that was the message that he conveyed to little kids: It really, really is OK to be yourself. 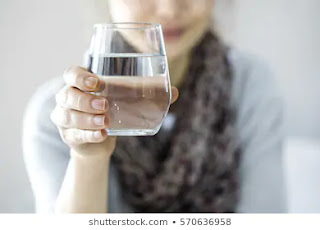 Mr. Rogers lived inside that paradox we know so well from being people with addiction. That thing the Big Book talks about: the egomaniac with an inferiority complex.

That simple message from Mr. Rogers is the perfect antidote to that dilemma: We want to be special, but we feel like we’re nothing. Or when we feel “less-than” we try to puff up and look like a big deal.

“There is no one just like you,” Mr. Rogers says and it’s all there: no need to puff up, you are special, and so is everyone else. It’s like the statistical improbability of Lake Woebegone: Where all the children are above average.

The man who wrote the listener essay said that he now caught himself trying to entertain his kids, to be a clown, and to buying them things to be a “great dad” when, he realized that he could simply be “their Dad”
He said in his closing--and this shot straight to my heart-- “I realized I could simply be a glass of water instead of a can of Coke.”

I got it. I so often want to be a can of Coke because I think it’s better or expected. And because, even after so many years, there is still a part of me that does not believe that I am enough.
A glass of water instead of a can of Coke. I too often reach for shiny and red and sugar sweet instead of cool and clear and refreshing. Is there anything more truly thirst quenching than a glass of water? Anything more relaxing to be around than a person who just is naturally simple and clear?

This is another way to say, “Be yourself” and “You are enough.”
But I like this question:
Am I trying to be a can of Coke today or glass of water?
Posted by Diane at 4:55 PM 62 comments:

Email ThisBlogThis!Share to TwitterShare to FacebookShare to Pinterest
Labels: authenticity, being yourself, Fred Rogers

Even after all these years of recovery I catch myself having expectations for Valentine’s Day.
How many resentments this day has caused: Dates, boyfriends, husbands. Even knowing that Valentine’s Day is a commercially created day, the pressure persists.

How do recovering people practice loving-kindness for ourselves and others on Valentine’s Day?
How does recovery guide me to make Valentine’s Day a happy day whether I am in or out of a romantic relationship?
And what does love really mean in the context of recovery?
One of the joys of being in recovery is watching other people grow. For me, it has been particularly moving to observe sober men as they change their lives and beliefs.
Early in recovery—just shy of two years --and at that point where the fog was clearing –a man named Fred who was in his late 50’s came to my home group one morning. It was his first day out of treatment and he was in pain. His “bottom” involved devastation at both work and at home. He was hurting.
I listened as he spoke, and I recognized his grief. Then, after the meeting ended, I watched as the men in our group surrounded Fred, they gave him phone numbers and insisted that he come to breakfast with them. I watched as the men taught him and loved him.
Even though others in the group had had done that for me two years before, it was then, with Fred--when I was just sober enough to understand what I was seeing-- that I recognized love in action.
That moment is one of my recovery treasures. That day I felt my heart open enough to care for and give love for another person in recovery.
It makes me happy to see men change. To know that under different circumstances my father and my brothers might have changed too. I love knowing that there is an endless supply of love in these rooms and that we are all changed by that love.
In early recovery I used to hear, “Let us love you until you can love yourself.” It felt like a puzzle, a bafflement. I didn’t think you could love someone into change.
I mean, hadn’t I tried that for years with disastrous results?  I understand now that it wasn’t really love I was proffering, more like control. I was just trying to control someone or trying to make him love me.
In romantic relationships, and sometimes as parents, we mistakenly try to love people into changing. And it generally doesn’t work.
But in our Twelve-step fellowships it does. Our friends in recovery can love us until we can love ourselves. And when we have learned to love ourselves, we can then truly love others.
That changes the meaning of Valentine’s Day for me, and it makes it a special day of gratitude.

****
To read more about love and relationships in recovery take a look at "Out of the Woods" published by Central Recovery Press.