You know that thing that parents say when a kid 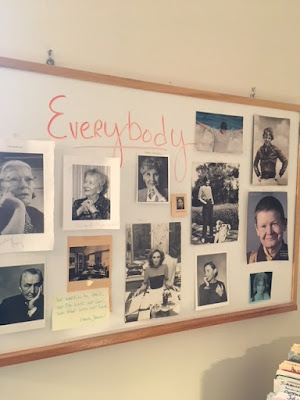 begs, "But everybody's doing it." And Mom or Dad say, "Well, if everybody jumped off the bridge, would you jump too?"

They were trying to be helpful and squash that
sense we had of wanting to fit in, and be like everybody else.

Well, that feeling doesn't go away just because we get older. And, if we are trying to do something new or risky, that wanting to be like  "everybody" can often haunt or hinder us.

Well, I found an adult way of helping myself through that sticky, insecure spot. I made myself an "Everybody Wall".

Since I struggled with believing in myself as a writer and artist and performer--I had to redefine who my "everybody" is.

When I would get stuck thinking that I was supposed to be different, or successful in some other way, I knew that I needed some peers. And in the beginning--and even now--I had to find those peers in people I loved but had not met. And that's who went on my "Everybody Wall."

I needed reminders that there were many women who heard that different drummer, or who were called to do less traditional work, or who turned out to be just fine even though they were not liked, or understood, or even truly known.

Here are my pals, my sacred sisterhood, my everybody:

Who are your sisters--your sacred mentors--and your "everybody"?
Posted by Diane at 8:18 PM

Email ThisBlogThis!Share to TwitterShare to FacebookShare to Pinterest
Labels: being like everybody, choose your sisters, creating peers, creating your own community

5 years ago I had warts, I was treated with some liquid applied to the warts they continued to grow and spread... The next 2 doctors did laser surgery to remove them. 1 year after the surgery, they grew back close to where the 1st ones were' so I was finally told it was hpv. I have had it for very long time, I contract it from my cheated boyfriend and I found out he was also infected and I end up the relationship between us. the warts was so embarrasses because it started spreading all over I have be dealing with this things for very long time the last treatment I take was About 2 years ago I applied natural treatment from Dr onokun herbal cure, a week after applying the treatment all the warts was gone. it's now 2 years and some months I don't have single wart or any symptoms of hpv. wow"" it's great, Dr onokun has finally cured me. Anyone living with hpv contact Dr onokun for natural treatment.
His email address: dronokunherbalcure@gm‎ail.com

Do you know that there is a great herbal doctor who can cure any deadly disease like herpes, hiv/aids, cancer, syphilis, madness, hepatitis b, STD e.t.c. well my main purpose of wACriting this to the whole world is about the great deeds DR ODOMA  did for me. I was diagnosed of a deadly disease called HIV/AIDS since the year 2000, ever since then i have been taking medications on till i met a great herbal doctor. though i never believed in Herb medicine, i saw many testimonies on how he cured so many people and i decided to contact him. so i contacted him through his email, he gave me a form to fill, i filled it and send it back to him and then he told me that he would require some items to prepare a herbal medicine for me. i did'nt know were to find the items, and he told me that the only alternative is to help me get the items and he helped me purchase the items from the items seller. i promised my self to do anything to get cured, so i sent him the money and he prepared a medicine for me and he told me how i will be taking it. he asked me to have faith and believed in him which i did, 7 days latter he asked me to go for a check-up, when i did the check-up i was tested HIV Negative. All thanks to DR ODOMA. if you are passing through suffering and hardship and you need a way out , i advice you kindly contact him via his email on    drodomasolutionhome20@gmail.com  . you can also WhatsApp +2348100649947
he is a specialist in all kind of sickness and he can bring your EX back with his great spell.