The Girl Behind the Door--Attachment Disorder

Maybe this book is not a Valentine but it is definitely a love story. 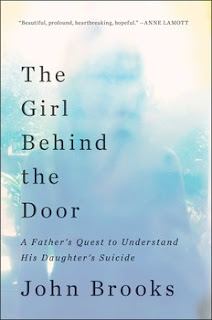 John Brooks spent years trying to understand the suicide of his daughter Casey. That in itself a tragedy, but also that her diagnosis of an attachment disorder was delayed by so many years.

Casey was adopted from a Polish orphanage. She experienced extreme deprivation as an infant and, in a sense, never recovered from that attachment disorder. That despite loving parents, a good home and many benefits of an upper middle class life. What happens to us early does matter.

I spoke to John Brooks last week about his life with and after Casey and his long journey of research and writing. His discovery of the impact of early emotional deprivation and the resulting attachment deficit will interest all of us because attachment disorders—there is a spectrum—can touch lives of people with addictions as well. It is not a phenomenon of people who were adopted only.

Brook’s book is very powerful as he details Casey’s life, struggles, her death at San Francisco’s Golden Gate bridge—which also has its own history related to depression and death, and then Brook’s research offering new information to adoptive parents.

Importantly Brook’s story inspires any parent who has a child struggling with a mental illness or behavioral disorder. His is a caution and instruction to keep searching for answers and expertise.

Simon and Schuster published “The Girl Behind the Door—A Father’s Quest to Understand His Daughters Suicide” this week.


You can read more about the book and even see a video of John discussing Casey’s story at SimonandSchuster.com
Posted by Diane at 7:10 AM