It's Not the Monster That Scares Us

One of the scariest moments in a horror movie is when the baby-sitter gets the phone call telling her, “He’s in the house with you!” And “he” of course, is the monster.

As Halloween approaches, we’ll have lots of horror stories to entertain us, and one of the great classics is Frankenstein, by Mary Shelley. A best seller in 1818, and rarely out of print since, Frankenstein may be the most beautifully written scary book. A gripping story, the novel is packed with social and philosophical issues that will surprise those who only know the movie version of the story. 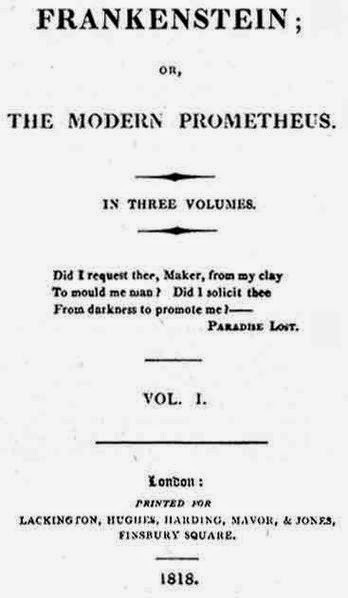 What makes Shelley’s novel a relevant work for today are the questions that she raised so eloquently: What does it mean to be human? Where will science lead us? And, “How do we discern morality in technology?”

These questions are as perplexing now as they were at the dawn of the scientific era. The issue of technology’s intrusion into life --and death --is at the heart of today’s news. We continue to learn about new ways to overcome disability, advance fertility, control disease and delay death, but at what costs and to what limits?

It could help us to closely read Shelley’s novel and take up her questions for today.

When we hear the name, “Frankenstein” most people think of the rivet-headed monster immortalized by Boris Karloff in the old movie. We picture the lumbering creature that was assembled from body parts, and this common misidentification shows just how easily we tend to blame the victim and overlook the bad guy.

In Shelley’s novel the large, disfigured man is simply named “The Creature”.   Frankenstein was not that sad man, the product of then-modern medicine, but rather his creator, the scientist, Dr. Victor Frankenstein.

Mary Shelley showed us that the tragedy of Frankenstein, and what led to the tragic consequences, was scientific experimentation done in isolation. Her brilliant young scientist had no association with his peers, no interactions outside his laboratory, and no ethical or moral constraints to balance his work.

Does that seem an accusation of our times? Dr. Frankenstein confesses his own dilemma: “In the year I created the Creature I had no intimacy, had not read a book, had a meal with friends, heard a concert or been to church.”

Maybe that seems a heavy admonition against workaholism, but how much do competition, secrecy and speed to market drive this same isolation in science today?

The original story makes the point that scientific experimentation of itself is not wrong; the trouble lies in its separation from social discourse.

Shelley’s point is subtle but important: Dr. Frankenstein is a tragic figure not for experimenting but for neglecting to take responsibility for the impact of his work. The issue is not to prevent creativity but to take responsibility –collectively and individually--for the social and human cost of each new technology.
Frankenstein is the perfect myth for us right now. It’s about scientific inquiry outside of community dialogue. Think about Syria’s poison gas, our drones, fracking, “killer robots” and our detached way of dealing with death.

It’s so easy to point a finger at science but we find ourselves, as consumers and patients, demanding better healthcare and cures for the diseases that killed our ancestors. Every day we read about medical breakthroughs--new technologies for cancer, heart disease, fertility. How do we draw the line?

Many of us hope we’ll get to benefit from some of those lifesaving advances, and we may even hope that advanced military technology might shorten war by intimidating our enemies.

We don’t want scientific progress to stop. But we, not just scientists, have to ask Shelley’s questions: What is the value of human life? What is the consequence of saving one? Or of making one?  But we have to consider the unintended consequences and ask, “Who’s the monster now?”


Our tendency is to point a finger and say, “It’s them…” and  “It’s their fault…” But our lesson comes from Shelly’s classic story and the scary movies:  He’s in the house with us.
Posted by Diane at 9:45 AM