You Have to Learn Their Language--Nelson Mandela on Robben Island

Last week I was a guest on the island of Nantucket, in Massachusetts. I was participating in a program called The Nantucket Project (TNP) which brings together people of differing backgrounds and points of view and creates a “container” of sorts—physical, emotional and spiritual—in which people can talk about their commonalities rather than differences. 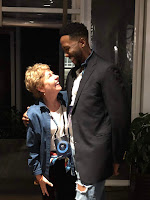 Many of us are trying to attempt this kind of communication now—all of us who are fed up with the anger and blame and harsh judgments that we witness and experience on social media.

The Nantucket Project (TNP) is like a high-end version of Quaker meeting, or maybe, more familiar, it is like what those of us in recovery understand from conversations in our fellowship.

Several times during my four days on Nantucket I sensed that TNP was replicating the deep conversations that people in recovery have the luxury of experiencing regularly, because our traditions and guidelines help us to care about each other through our differences. And it is a gift.

One of the speakers I heard on Nantucket last week was Ndabe Mandela, the grandson of Nelson Mandela. Ndabe was a boy when he came to live with his grandfather and he began to learn the ways—both fierce and compassionate—of being in the world and being a man.

Ndabe Mandela told the audience the story of Nelson Mandela’s time as a prisoner on Robben Island. Mandela was there for 27 years in isolation--cold, hungry, aching and aging. He knew that he would be there a long time—expecting to end his life imprisoned—and had every reason and expectation to be hateful and hated.

But what Nelson Mandela did was to become fluent in the Afrikaans language, the language that his guards and captors spoke. He taught himself to speak and read and write Afrikaans, and it happened that, over time, the guards—many of them less literate than Mandela—would come to him to have him read them their letters from home and have his help in writing back to their families.

As you can imagine, when you are reading another person’s correspondence and helping them sort out their family situations, it is a very intimate experience. You quickly find your shared humanity as you discuss another person’s children or in-laws or marriage or money. Mandela quickly cared for his captors and they in turn, for him.

This was an enormous frustration for the prison managers who wanted Mandela to suffer and to feel isolation. The detail of guards surrounding Mandela had to be changed every three months because they would—each time—begin to care for the old man, and when they cared they would start to bring a little extra food, or extra blanket etc.

And so, his conditions, which were intended to be quite harsh, kept improving much to the consternation of the wardens. 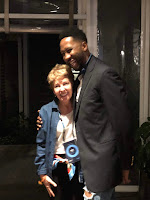 What was so striking to me about this story was that change came about because Nelson Mandela learned the language of his captors.

Relationships were forever changed because he made the effort to change toward them without an expectation of them changing toward him.

The take away is this:
Wherever we have conflict in our lives, wherever we are insisting on our rightness, that is when we have to learn the other person’s language and they (any “they”) do not have to learn ours.
Posted by Diane at 9:35 PM

Email ThisBlogThis!Share to TwitterShare to FacebookShare to Pinterest
Labels: Leaning toward the other person, Ndabe Mandela, Nelson Mandela, not being right, surrender