Father's Day on the Diving Board

He would wait, treading water, out a ways from the board. He would look around and give me the sign that it was OK to dive. And I would stroll to the end of the board, tugging at my stretchy lavender swimsuit, and bounce in the air before I dove in.

I would rise to the surface sputtering, and look for his face. He would hesitate a moment to let me right myself. I would cough and beam. He would grab the back of my suit and give me a push toward the side. “Swim to the ladder,” he would say. And he would stay out at the end of the board waiting. I remember 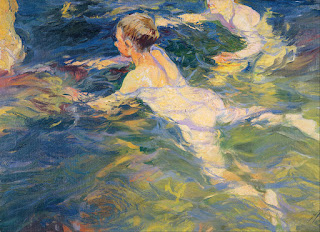 I remember the feeling as I paddled to the ladder. The world was perfect: I was diving in the deep end of the pool; there was no pain, and no evil in the world. There was no need or want in my life.  I was a perfect, grinning, sunburned, waterlogged four-year-old, in love with the world, herself and her daddy.

He died when I was 18. In the intervening years life happened to me and to Daddy.  By the time I was 13, he was traveling a lot, and when we did spend the occasional weekend together we did not speak of personal things. There were no talks about plans or dreams. As a teen-ager I felt awkward with my father so I would interview him about his job.  I know a lot about industrial engineering. It filled our time.

On a July evening, when he was 56, my father had a stroke and died.

Has it affected me? Of course. To have had that closeness and to lose it; to have had those timeless moments of being safe and special and then to lose him when I still needed to ask what happened.

It took years of my life, of other relationships, addictions and years in recovery for me to wrestle with those two men--the daddy who waited in the deep water and the man who left suddenly, without a word, when I was 18.

Somewhere inside, that four-year-old still wears her lavender bathing suit. She is at the end of a diving board and leaning forward to hear someone say, “You are so special.” “You can do it.”

I’ve learned a lot from listening to that little girl. I know that in romance we get some of that need met, but romance has its own path and after a while no one wants to admire us every day.  Another way to meet this need is with an affair.  Having an affair is a way a four-year-old can twirl in a 40 year-old body and hear again, “You are the only one.”
In the first five years of recovery I practiced healthier solutions.  I practice in the mirror: “Diane, You are very special.” But all the praise and promises in the present cannot fill a hole that exists in the past.

Later I learned to meet this need in a spiritual way. In the rooms I began to meet people who had a connection with their God or higher power that helped them to live believing that God smiles warmly on them.

So what is the gift from a father who left when we were both too young? It’s this: For a long time I resented the missing memories; no father-daughter chats, no drives to college, no adult conversations. But I have this other thing--a picture in my brain and in my heart of my father still there at the end of the board, smiling and waiting.


Today I believe in a God who looks around my life and says, “Hold on a minute. We don’t want anyone to get hurt; then, “OK, go for it, I’m here.” I have a God at the end of my daily diving board that says to me, “Okay now, catch your breath. I’m here.”

A beautiful tribute to your father and to your HP... Thanks for sharing it

Resonates with me in so so many ways. Thanks for your honesty, for your reflection. My story is that I had God all along after my dad died when I was 13. But we never talked much about him, never got to ask about the 'secrets" behind his death - and I knew they were there. My mom kept so much locked inside and it weakened her though she fought two cancers before the third took her at 65. The "loss" of her all the years that she held down grief (because she knew no other way to survive), kept busy learning and caring for all 6 of us was the work I needed to do. And some I'm still doing. Dad I've made peace with, though that sad, angry, locked up teen girl is still messing with me. We'll keep talking. God is nudging us both - keep talking - and my mom listens and sometimes chimes in. Writing is how we connect now. thanks again...